← more from
Voodoo Rhythm Records
Get fresh music recommendations delivered to your inbox every Friday. 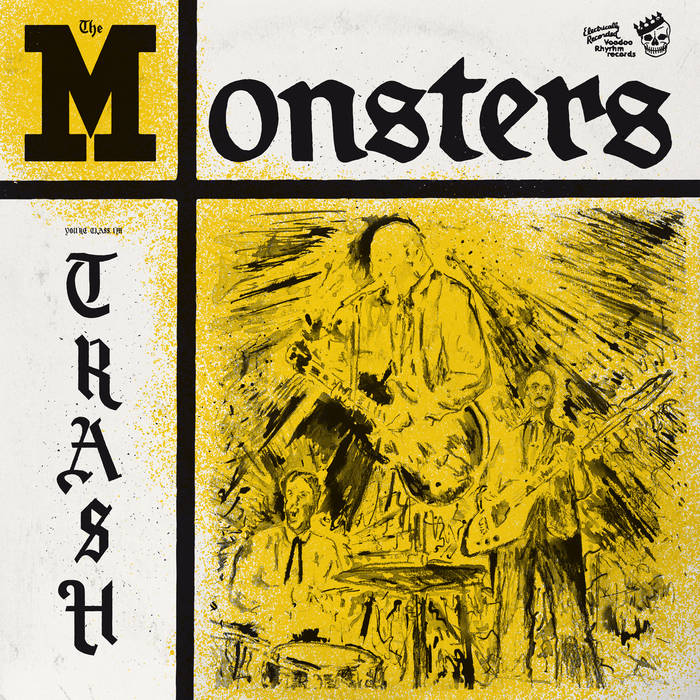 sonic dojo trash at it's finest - love it

jerkybillthecat Raw, loud, unapologetic and it shouldn’t be any other way. I was surprised when it arrived- way earlier than the 11/12 date I was told- chocked full of swag and a free comp cd! Not to mention the 7” as well. This is the way vinyl should be.

Please order the Vinyl LP and the Audio CD from our 'other' Side
--------------------------------
voodoorhythm.myshopify.com/collections/news/products/news-the-monsters-youre-class-im-trash-vrcd119-vr12119
--------------------------------
Nestled centrally within landlocked Switzerland is the quaint town of Bern, a place where world leaders regularly meet, 12th century medieval architecture gracefully intersects modern designs, and the location where Einstein’s Theory of Relativity was originated. Class is a term synonymous with this town given its historical and cultural heritage but in the case of the chainsaw-on-steel sound of legendary Bernese garage punks, The Monsters, class is an irrelevant term to them. Thanks to COVID-19, the touring life of this Bernese super trash machine was put on halt and they used their newfound time to write and record the apocalyptic, hi-speed-boogie-fuzz-garage-trash-rock-n-roll songs you have in your hands here. A new album wasn’t enough for the quartet during the year; they were also contracted by Swiss film composer Mario Batkovic to assist in the soundtrack composition of a small horror opera, which will soon be announced.

Quotes
"The Monsters are the best thing to come out of Bern, Switzerland since Einstein wrote his famous theory there, paving his way for this record to be possible. Ceaselessly charming trash, often approaching light speed. They should teach this in school." - (Mike Edison - Author - Sympathy For The Drummer: Why Charlie Watts Matters)

"Well, whattayaknow!? Just when you start to believe that all is lost, and the enemy has finally managed to strangle Rock&Roll to death, our favorite Garage Trash Superheroes The MONSTERS turn up and save the day with a brand-spankin' new slab of twisted Rawk&Roll wonderfulness, that will stomp you straight out of your eighteen-month pandemic depression! Obviously, travel restrictions are a bitch to any band, but our swiss legends took the opportunity to lock themselves into their rehearsal cave and embark on a two-week trip into the warped and crazy mind of…The Monsters.

Holding on to everything weird, wild, and wonderful they stumbled across along the way, what came out the other side was this raw and eclectic collection of ferocious Garage stompers ("Stranger To Me", "Electrobike Asshole"), groovy Trash explosions ("Carpool Lane"), just plain insanity, fragile little gems like “Yellow Snow Drink”, and lots more. It has traffic jams, harpsichords, under 120 words of lyrics, and NO overdubs, so what else could anyone possibly ask for? With “You’re Class, I’m Trash”, The MONSTERS have managed to deliver an album that makes no sense, yet perfect sense at the same time. And it’s great!

So yeah, class don’t matter, and the MONSTERS are trash! Stick thát up your Klaus Schwab!" (Bartmann - Peter Pan Speedrock)

- Produced recorded by Sebastian Zwahlen at Shirt Off Studio, Bern Switzerland 2020
- mastered by Lo Spider at Swamp Lands Studios Toulouse France 2021
- released trou: Voodoo Rhythm, Slovenly, Sounds of subterranea
- Cover Artwork Drawing by: Jerry Haenggli
A stead to go on tour we wrote and recorded those songs .. thanks to Covid-19
Recordings made from Juni 3 to June 7.2020 at Shirt Off Studio in Bern Switzerland by Sebastian Zwahlen
mixed in another galaxy by Sebastian Zwahlen
end Master by Lolo at Swampland studios Toulouse
studio work and editing by Adi Flück at Central dubs Bern, Switzerland
Cover Drawing by Jerry Haengeli and Artwork by Swan Lee

The Monsters where formed in 1986 in Bern, capital of Switzerland. Their sound is a fuzzedout mix between 60ies garage punk, wild teenage trash rockabilly and primitive rock‘n‘roll. Its 187% no MTV and top 100 shit!
The Monsters are a kickass live band who will burn every stage down. Over the years The Monsters recorded 7 albums, several singles and EP's and appeared on countless compilations. ... more

Bandcamp Daily  your guide to the world of Bandcamp

Bonobo stops by to talk about his new record Fragments